Frequentis is an Austrian high-tech company that develops communication and information systems in fields such as air traffic management and public safety & transport (police, rescue and fire services, coastal rescue, railways, shipping, and others). For my master’s thesis I was asked by Frequentis, to redesign the Frontend of the smartATIS software.

One of Frequentis‘ core products is smartATIS, an automatic terminal information service application. It is a natively programmed software used by many airports around the world. Due to the limits native software has to offer, a web-based prototype was proposed. The focus of the prototype is to make smartATIS more scalable. Moreover, calculated ATIS (Automatic Terminal Information Service) information of smartATIS is needed in other parts of Frequentis software. The proposed solution therefore offers a possibility to send the needed information to other web-based Frequentis products by splitting the information into components.

The focus of the thesis was set on the performance of the prototype. The framework design included a performance test that had the purpose to find out how a web-based ATM prototype behaves under high user loads.

Mockups of the prototype were created in Adobe XD.

The Frontend prototype was developed in Vue.js with Vuetify for the visual part. Normally, Vue.js components are part of the Frontend. However the Frontend just offers dynamic components, which are needed to dynamically load components from the Middleware server.

A Middleware was also developed, in order to perform load tests. This server is based on a Node.js / Express.js architecture. A Firebase Firestore was chosen as a Database. 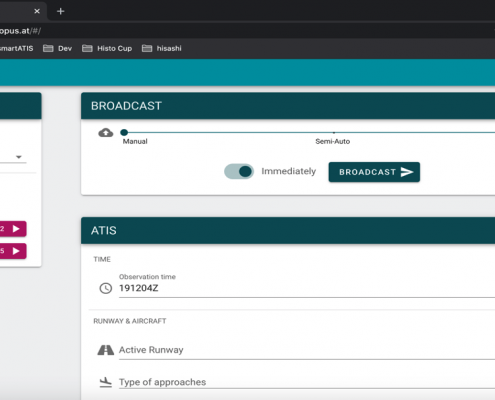